Liv is a 10 year old girl with nemaline myopathy. Despite the immense struggles she has endured in her short little life, she continues to amaze us with her sweet and easy disposition and her beautiful smile. She loves observing the world around her, especially her big brothers. As you will see from our story below, Liv was our hope and inspiration during what we thought, until now, was our greatest challenge.

Shortly before my oldest son’s first birthday, I learned that I was pregnant again. My husband, Boris, and I were elated. One night as we were watching television, I felt a small lump in my breast. I had a biopsy the following day and my life was forever changed when the doctor told me the lump was cancer. Not just cancer, but the really bad kind of cancer. It was the most aggressive type of tumor and had already spread to my lymph nodes, making it stage III. Because I was pregnant, the doctors weren’t able to determine if the cancer had metastasized. Boris and I spent days agonizing over whether I could battle cancer while pregnant. Our doctors assured us that our baby would be fine. It was me that was the unknown. My treatment would be different due to the pregnancy. But the doctors were also quite confident that the extended and aggressive chemotherapy I needed would make having more children in the future nearly impossible. And so Boris and I decided that I would fight for my life and bring another into this world at the same time.

I had surgery and began chemotherapy immediately. I was 16 weeks pregnant. I endured 4.5 months of chemo then took a 2 week break to build up strength to deliver our second son, Baron, our miracle warrior. 2 weeks after he was born, I began my second 3 month round of chemo. After completing chemo, I had a double mastectomy, reconstruction and 28 rounds of radiation.

Throughout my year and half in treatment battling cancer, my sons helped me immensely. In their own unique ways, they made me smile, fight, and find joy when life felt joyless. But also tremendously helpful was the hope that Boris and I would have another child. We looked forward to a normal pregnancy and enjoying a newborn without the challenges of cancer. Never accepting “no” for an answer, and true to my love of proving everyone wrong, despite the doctors’ bleak predictions of another baby, I learned that I was pregnant with a baby girl on my third cancer free anniversary.

I had an uneventful pregnancy with normal and healthy test results every step of the way. Boris and I, along with her two big brothers, welcomed our daughter, Liv, into the world in January 2012. At birth, we noticed that Liv had problems feeding. She would choke and gag each time she was fed. Doctors told us this was common with babies delivered via c-section. However, after 2 weeks of life, Liv’s struggles to eat worsened and she was failing to thrive. She was immediately hospitalized and underwent a battery of tests including MRI’s, upper GI’s, additional scopes and a slew of blood tests. All results were normal. Liv was sent home with a temporary feeding tube and no diagnosis. 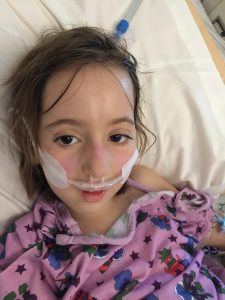 During the proceeding months, we also noticed that Liv was weaker than her brothers and was missing gross motor milestones such as lifting up her head and rolling over. Her eating would get better and then would worsen and she frequently had traumatic events where she was so congested or vomited so much she couldn’t breathe. She had more scans and scopes and blood work, to no avail. We were drowning in fear and sadness at the inability to help our daughter and our sons struggled with all of the attention their sister necessitated. At 7 months old, we realized that Liv was simply too weak to eat enough on her own to grow and agreed to surgery to place a gastrostomy tube. Liv had a muscle biopsy at the same time. Two weeks later, we received the heartbreaking news of Liv’s diagnosis: nemaline rod myopathy.

Nemaline myopathy (“NM”) is a disorder that primarily affects skeletal muscles, which are muscles that the body uses for movement. People with NM have muscle weakness (myopathy) throughout the body, but it is typically most severe in the muscles of the face, neck, and limbs. This weakness can worsen over time. Affected individuals may have feeding and swallowing difficulties, foot deformities, abnormal curvature of the spine (scoliosis), and joint deformities (contractures). People with NM, including Liv, are often unable to participate in everyday activities such as walking, standing-up and eating. Most NM patients need a tracheostomy, feeding tube and wheelchair. Although the disease is slow or non-progressing, the muscles generally are not strong enough to support a full grown skeleton which leads to scoliosis, further respiratory complications and loss of or inability to walk, usually by the teenage years when a major growth spurt occurs. Life expectancy is significantly lower with respiratory complications being the cause of death.

The occurrence of NM is 1 in 50,000. There is currently no treatment and research is scarce given the rarity of the disease. Thankfully, shortly after learning of Liv’s diagnosis, we found A Foundation Building Strength for Nemaline Myopathy. The Foundation seeks to raise money to further a single mission – to find treatments for NM. To accomplish this mission, the Foundation awards grants to scientists to fund their research. Some of the top scientists in the world studying NM, such as Alan Beggs at Harvard University, serve on the Foundation’s scientific advisory board to assist in the selection of these research projects.